In a series of discussion papers, partners of the Heinrich Böll Foundation Lagos program give thought provoking suggestions for an inclusive and climate resilient city building to the new Lagos State government which will take over on May 29, 2019. The ideas are based on the findings of our research “Urban Planning Processes in Lagos”; many of them could be implemented within a short time span requiring in general low funding but transparent and efficient cooperation between different stakeholders; above all it will require political will.

Summary of the findings cutting across the different sectors:

• Lagos is an informal city and its future development will be driven by the informal sector, especially considering the expected population growth in the next decade.  Therefore, vision, design and planning of the future city has to be done with a priority of addressing the needs, wishes and capabilities of the informal sector.

• Cutting across all sectors, it became clear that the communication with the citizens needs to be improved. Service hotlines addressing different sectors will be required to ensure that citizens can monitor and complain on the spot if master plans are violated or municipal services are failing. Such service hotlines could be set up in each local government and be run by with service-oriented staff who are able to coordinate necessary responses from the responsible ministries and agencies.

• Flood resilience and inclusiveness have to be the main drivers for a sustainable development of the city. The implementing agencies, LASPARK and LASURA, have to play a more prominent role in achieving development goals in future. They need strong political backing and upgrade, and financial and human resource investments.

• Similarly, new infrastructure and new investments will remain white elephants if local governments are not given back their capabilities to execute their constitutional duties in urban development. This has to be done in a gradual process through pilot cases with clear benchmark schemes.

• More women need to be part in the decision making and taking processes at all levels to allow the female perspective of experiencing a city to be fully reflected.

• Equally cutting across all sectors, it became clear that the passing of policies and laws or investing in new infrastructure will remain ineffective as long as enforcement procedures are not improved. Enforcement officers have in general not been respected by the population because of their often corrupt and disrespectful behaviours.

A paradigm shift in the training and remuneration of the enforcement officers is needed, they should be seen as mediators and trainers who will treat citizens respectfully when using the power of enforcement entrusted in them.

Read more on the discussion paper on "Flood and Wetland Management" for more details:

Did you see these? 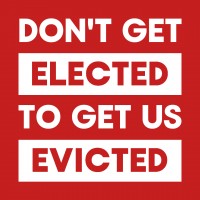 DON’T GET ELECTED, TO GET US EVICTED
Featured